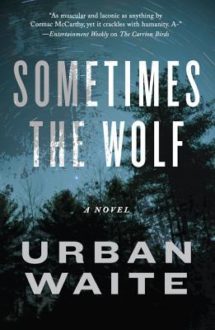 Sometimes the Wolf by Urban Waite
Published by William Morrow Paperbacks on October 21, 2014
Genres/Lists: Fiction, Mystery/Thriller
Pages: 277
Read synopsis on Goodreads
I received this book for free from the publisher.
(this post includes affiliate links)

I’m not a big reader of mysteries and thrillers but this year I’m trying to widen my reading net and have been picking up more than usual. Such was the case with Sometimes the Wolf by Urban Waite, a title that I’ve had on my Kindle for longer than I care to admit. I’m one of those readers who tends to ignore books that have been on my Kindle for too long but if this one is any indication, I need to rectify that starting now.

Sometimes the Wolf is part mystery, part family drama. It tells the story of Patrick, a former sheriff released on parole after 12 years, and the son he left to deal with the aftermath. Their relationship is tenuous, at best, but the secrets that Patrick keeps hidden threaten to expose just how fragile it is. To complicate matters, Patrick’s past catches up with him in ways that put everyone he cares about at risk.

This book was exactly what I needed. I’ve been reading some dense non-fiction books lately and found myself needed a break. Sometimes the Wolf fit the bill perfectly, offering up a great story of father/son conflicts, small town secrets, and a zigzagging path to an ending that could have gone any other way. The book easily could have been longer and I wish that the characters were more fully developed. The relationships contained within the story were extremely complicated and could have been explored more deeply, but I can also see how doing so would have altered the book as a whole and don’t fault the author for it.

If you enjoy mysteries that take place in the wild, then read Sometimes the Wolf. Click To Tweet

Where the book lacks character development, it makes up for in detail. The entire book takes place in the Pacific Northwest and it is clear from the beginning that Waite has an incredible respect for the land. His best imagery was in his descriptions of the land, from the landscapes to the smell of nature. It was easy for me to see what the characters were seeing, despite having never been to the area. And, of course, I appreciated the symbolism of the wolf, which plays an integral part in the story but that I won’t expound on because I don’t want to ruin anything for you.

Ultimately, this was the book I needed to read without my realizing it. It reinvigorated my reading, which has slowed lately, and gave me the much-needed break I needed from the dense non-fiction I’ve been spending my time with. If you’re looking for a good, quick mystery that takes place in the wilderness, then pick this one up.

Recommended for: Anyone who enjoys mysteries that take place in the wilderness and focus on the complicated relationships between fathers and sons.