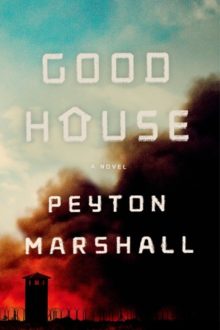 Imagine a future where you could pinpoint the genetic markers that determine a criminal. Now, imagine a time when the children of criminals who have this marker are placed into schools until their 18th birthdays in order to override their genetic predispositions. This, my friends, is the premise of Goodhouse by Peyton Marshall.

The novel follows James, one of these kids who is transferred to Goodhouse after his previous school was burned down by a radical group who thinks that these kids are a danger to society and need to be eliminated. Different from his counterparts in that he’s curious and skeptical, he befriends the daughter of one of the scientists, kicking off a fast-paced story that raises questions about science, humanity, dignity, and freedom of thought and action.

What drew me to the book is its premise, for attempting to predict violence based on genetics is a part of our ugly past, but it’s not a book that I would normally pick up. It’s also loosely based on a real school for boys, the Preston School of Industry, which is always interesting. That said, it’s hard to categorize this book – it’s not quite YA and it’s not quite dystopian/post-apocalyptic, but it does include elements of all three. This is worth mentioning because these are all features of books that I tend to avoid or dislike, but Marshall manages to blend them in a way that the book falls into none of the categories while also falling into all of them. So while it got a little weird at times (Bethany’s story arc was a little perplexing), the overall result was pretty fantastic.

In the end, Goodhouse is a quick read that will leave you with a lot of questions about both the storyline and its implications for reality. Sure, sorting four year olds into group homes based on genetics is not very likely, but using science to determine the “best” future for a person is not. After all, genetic selection is already here. It also has you rooting for James, for despite his flaws, most of the horrors that he is subjected to are not entirely too far-fetched, and everyone loves a great protagonist.

Recommended for: People who enjoy books about science and genetics and its implications.

What recent read has surprised you?