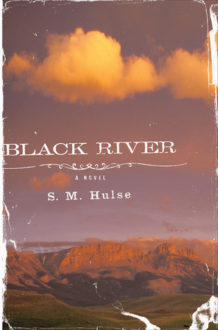 Black River is about a broken man named Wes who returns to his home in Montana with his wife’s ashes to set her to rest. While there, he reconnects with his distant step-son and struggles with whether or not to speak at the parole hearing of the man who broke him – an inmate who held him captive in a prison riot for 39 hours. You see, Wes was a corrections officer and a musician, and both were taken away from him that fateful day.

The story begins with Wes’ journey home and, as it unfolds, bits and pieces about that horrific day and its impact on him and his family come to light. The reader gets a glimpse into the aftermath, including how it affected his relationship with his stepson, which is tenuous at best. As Wes grieves and tries to move forward, he befriends a young outsider, a newfound relationship that will change everything.

Black River is a dark read that will take you on the winding road to redemption. It’s about a man coming to terms with both his past and his future, which are so entwined that it adds a beautiful complexity to an otherwise predictable story.

Black River is a dark read that will take you on the winding road to redemption. Click To Tweet

Do you enjoy dark, beautiful reads?