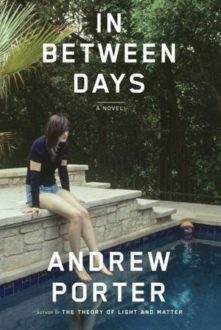 Andrew Porter’s In Between Days is about the disintegration of a family after a series of unfortunate events. If I had to pick a genre, I would say that it is adult fiction that could appeal to YA fans, as well (the cover is much more YA’ish than the book itself). Told from alternating perspectives, the story is centered around Chloe, the young twenty-something daughter that is sent home from school for reasons that only come to light later on in the book. Heartbreakingly realistic, the book is not one that reaches far out into the depths of the impossible for its storyline.

Unlike most books that center on a family falling apart, the circumstances, struggles, and hardships that each member faces are within the realm of possibility for the average family. While the parents are trying to navigate the waters of their recent divorce, their son, Richard, is going through a typical mid-twenties crisis in regard to his career goals. This is compounded by the fact that Richard and his father have a strained relationship that stemmed from the father’s reaction to Richard coming out. While this added another dimension to the book, I like that the author chose not allow this storyline to take away from the main plot when he could have run off on another tangent.

My favorite part of this book was the ending. I don’t want to give anything away, but I will say that it was unexpected and realistic. Granted, the story as a whole is plausible but not likely, and that makes it all the better. If you’re a fan of YA (which I am not), you will love this book. But if you’re a fan of adult fiction, you should give this book a try. Don’t let the YA book cover scare you off!