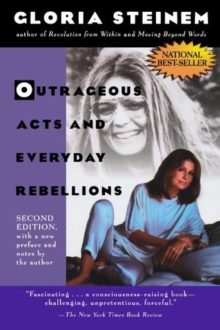 About two months ago, during a class simulation, I was in the hallway speaking with several male classmates. Despite that fact that I had done my research and was an active participant,  90% of the men I was with completely ignored me, despite my overt attempts to join the conversation. It was so bad, in fact, that all but one of them walked away while I was still talking. Infuriated, I clapped my hands loudly and demanded that they listen to me. Had I not just been treated in such a way by a group of faculty members a few weeks before, I may have let it slide for the sake of civility, but I was tired of men acting as if they were placating me by allowing me to speak. They may as well have patted me on the head and told me to be a good little girl and play nice.

I’ve always been very outspoken and assertive, so I’m not entirely sure how I made it to 30 without reading Gloria Steinem, but here I am, reading her for the first time. To be honest, I don’t know that I would have fully appreciated her or her work ten years ago, so maybe it’s for the best that I read her now! I’ve always thought of Ms. Steinem as an amazing, confident, trailblazing woman. I had no idea that she had a massive fear of public speaking, overanalyzed what she had said for days on end, and was constantly seeking approval. As someone who can identify with and is overcoming these same traits, it her ability to succeed and make such a long-lasting and positive change fills me with hope.

Outrageous Acts and Everyday Rebellions is a book of essays, most of which were written decades ago, and include relevant updates to keep the reader up to date on what the current state of affairs are. As Ms. Steinem points out in her introduction, some of these updates are depressing in that not much progress has been made. The essays range from how the transexual movement has affected gender roles, her time as a a Playboy Bunny, an essay about her mother and what would happen if men menstruated.

While all of the essays covered very serious topics, they were made more interesting with a type of humor that was not haha funny, but instead amusing in a this-is-real-life way. It made the book much more approachable and less preachy. In fact, the book didn’t seem preachy or “feministy” at all and yet I finished the book wanting to jump up and shout about how great it is to be a woman.

One of the things that Ms. Steinem emphasized in the book is that women tend to become more liberal as they get older, and thus are more likely to become “activists” later on in life. This is not because young women are failing to understand the importance of gender equality, but rather that until they are beginning (or even halfway through) their careers, it is not something they encounter in such a blatant way. Perhaps this is true, because while I’ve always believed in and supported gender equality, it wasn’t until the last year or two that I started to realize that I was on the unequal end of things.