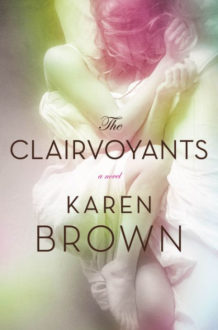 The Clairvoyants by Karen Brown
Published by Henry Holt & Company on February 7, 2017
Genres/Lists: Fiction, Mystery/Thriller
Pages: 352
Read synopsis on Goodreads
I received this book for free from the publisher.
Buy the book: Amazon/Audible (this post includes affiliate links)

A few years ago, The Longings of Wayward Girls by Karen Brown hit the streets running, generating a lot of early positive reviews. I remember it clearly because I didn’t read it, which is a perpetual problem for avid readers. But when the publisher reached out to see whether I wanted to try out her latest, The Clairvoyants, I vowed not to let Brown pass me by again.

The Clairvoyants is predominantly a mystery, peppered with the otherworldly and a dash of romance. At an early age, Martha Mary saw ghosts. Some she knew, others were strangers, but all were very real to her. Though she was given a respite in her teenage years, a violent incident and her sister’s subsequent collapse catapulted her childhood “friends” back into her life. In an effort to start fresh, she heads off to college only to find herself haunted by her past. Only this time, it’s the new dead that haunt her, particularly a young woman named Mary Rae, a local college girl who went missing when Martha Mary arrived on campus.

Even if our actions could have been forgiven, we were better at lying than telling the truth.

Martha Mary, for her part, is too preoccupied with shedding her past and her new and intense relationship with William, a local professor and photographer. He injects such a vigor into Martha Mary’s life that she easily chalks up his oddness and emotional distractions to his being an artist. Too distracted by the Stepford Wives-like behavior of the local girls and her sister’s reappearance in her life, she does what most college students to: experiments with who she will be when she grows up.

All of these things – the romance, the new vigor, the odd characters, and the ghosts – come together shape a mystery that will have you questioning everything and trusting no one. If I could change one thing, it would have been to incorporate additional aspects about the characters’ lives that are independent of each other. Simple things, such as how people made a living, were missing and it felt as if the characters lived in a world where things like paying rent were a non-issue (which is clearly not the case for a college student). This didn’t minimize the story, but it would have provided a more three-dimensional view of the characters.

Overall, The Clairvoyants is a pleasant read. Despite the ghostly aspects, the most tense moments are between those who are living, as secrets are found out and mysteries unfold. Brown’s writing style keeps pace with the plot, rushing when the pace picks up and slowing down for the descriptive sections, which makes it easy to turn the pages.

Recommended for: Mystery fans who like a dash of the ghostly with their dose of reality.