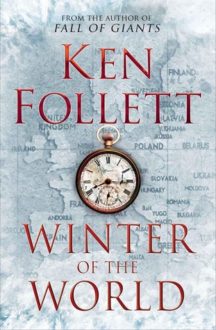 Every time I pick up a Ken Follett novel, particularly one of his trilogies, I know I’m going to love it. I first discovered him with Pillars of the Earth, which is a stunning historical fiction series about the building of a cathedral, and was such a hit it was turned into a mini-series. His latest trilogy, The Century Trilogy, is just as stunning but takes place in more “recent” times. The books span from the beginning of World War I to the end of the Cold War, with the first novel, Fall of Giants, ending around the end of World War I. The second book, Winter of the World, picks up some years later during the events leading up to World War II and through the war itself. Staying true to his penchant for impeccable continuity, the characters in Winter of the World descend from those in the first book and their intertwining lives only become more enmeshed as the world itself becomes more interconnected.

While the entire series embeds itself into the politics of the time, I was more in-tune with the events in Winter of the World simply because I am more familiar with the time period. Even so, I learned a lot about the nuances within countries, such as the warring military factions within Russia and their staunch pride and belief that they were the superior nation. But more importantly, Follett humanizes events in a way even some non-fiction I have read could not. His ability to write about the rise and fall of fascism and the battle between communism and democracy is proof of his gift for taking massively complex ideas and bringing them down to the individual level.

“If you don’t take an interest, then what happens is your fault.”

We see, firsthand, how someone beaten down by poverty can get caught up in the promise of a new day and the lengths the oppressed will go to to protect themselves and their families. We see the effects of changing one’s ideologies during a tumultuous time. We see how difficult it was for women, particularly those who wanted to stand up and do more, to do so. From the London bombings to the concentration camps to the Berlin occupation, Follett ensures that every single group of people impacted by the horrors of that time are represented. He touches on homosexuality, the rights of women, interracial relationships, premarital sex, abortion, and more. But more than just write about these topics, he writes to make you feel, and he succeeded.

That said, the book is not filled solely with despair. Woven within the real-life events are delightful characters whom I fell in love with. There were plenty of instances when I laughed out loud, widened my eyes in mock horror, and teared up because of the impossible love stories contained within the pages. In these volatile times when there are discussions about a Muslim registry and daily abuses are committed against people of color, I found myself more connected to this book than I would have expected. It is, at times, utterly gut-wrenching, but at others offers hope that, even in the darkest of times, there is light.  Today, I am choosing to focus on the light.

Recommended for: History fans who looking for a great story rooted in fact and anyone curious about where our country could go from here, if we so choose. 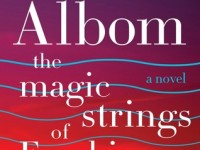